RHYTHMS OF THE NIGHT IN PUERTO VALLARTA--Our 25th Anniversary Celebration 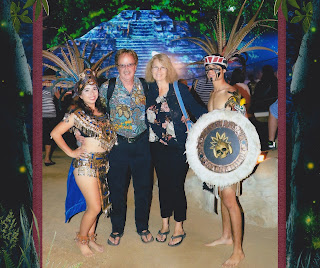 Jon and Terry Entering Rhythms of the Night
One advantage of living in Sayulita, less than an hour north of Puerto Vallarta, is that we can travel a short distance from our small-village life for a great selection of big-city adventures. Our 25th Anniversary was a perfect opportunity to spend a long weekend celebrating in Puerto Vallarta.
We decided to splurge on Rhythms of the Night, a dinner and show put on by Vallarta Adventures. I had heard many positive comments about this tourist activity, beginning with a boat trip to the romantic, private beach called Playa Las Caletas. Jon doesn’t usually go for tours and touristy shows, but being the accommodating husband that he is, he agreed to book the trip.
Our motorhome comes in handy for getaways like this one, so we’re always glad we have it stored in the area. No hotel rooms for us—we carry our suitcase, our bathroom, our bedroom, our kitchen, and Bella, our doxy, with us wherever we go. The Puerto Vallarta Trailer Park was our home away from home, a tropical garden setting, a quiet oasis away from the city traffic noises, yet only two blocks from the bus stop. We could catch a short, inexpensive bus to the Romantic Zone for night life or the marina for the Rhythms of the Night event.
We started our celebration Thursday evening at Kelly’s Pour Favor Saloon and Cookhouse in the Romantic Zone. The Gecko Band was playing rock ‘n’ roll and the house was packed. We managed to belly up to the bar and eventually secured stools. The music was great, including two harmonica players who took turns playing with the band. Singalongs included a loud and rowdy version of “Living Next Door to Alice”. Jon’s fried chicken dinner and my sweet potato fries with chipotle mayo were perfect saloon meals.
Friday afternoon, the dark clouds rolled in, and we wondered if we would get rained on at the Rhythms of the Night show. We packed jackets and rain ponchos in a backpack to be safe, but by the time we checked in for our sunset cruise to Las Caletas, the sky had cleared. While waiting to board our boat, we settled in at a tiki bar for our first celebration margarita. That’s when an animal conservation group introduced us to their Macaw, let him sit our shoulders for photos, and had him kiss our cheeks for more photos. Naturally, we had to purchase all of the photos as memories of this once in a lifetime anniversary celebration.

The hour-long sunset cruise was enjoyable with an open bar and entertainment by the crew members. We didn’t see any whales that afternoon, but the view of the Puerto Vallarta shoreline past Mismaloya to Las Caletas was beautiful. After disembarking at the dock, we followed the lighted path into the tropical jungle to the restaurant. Here, the pre-dinner show began.

Over 3000 candles and many torches lit the paths and seating areas, creating a glowing, romantic atmosphere. Along the way, we were constantly presented with beauty and entertainment, from waterfalls to costumed actors portraying people from ancient times and beings from the spirit world. I especially enjoyed the trio of musicians, one of which played a crisp tune by tapping a stick against a row of hanging wine and liquor bottles filled with different levels of liquid.

We dined at a prime table on the upper terrace overlooking the clear blue ocean and two floating docks complete with palm trees, hammocks, lounge chairs, and shade umbrellas. As our attentive waiter served us margaritas, the sunset colors softened, mixing coral pink clouds with the clear blue sky, all reflected on the ocean below, adding to the romance of the evening. We couldn’t have asked for more from the dinner experience.

From the restaurant, we followed another candle-lit path through the palm forest to the outdoor theater where a skit was already underway on the stage, entertaining those seated and waiting for the show to begin. The backdrop was an actual pyramid, towering high above the stage. The lighting projected on the pyramid changed with each act, altering the setting from a waterfall to a Mayan temple and various other colorful structures.

We were very impressed with the quality of acts and music—even Jon was glad we had experienced this show called Savia. As described on the Rhythms of the Night website, “Powerful images, original music, dance and acrobatic performances surround you in this magical environment. Let your imagination soar with Savia: The Legend of the 5 Suns.” Jon and I agreed that the show was magical. I have included a brief video below to tempt you to take in this spectacular show. We were told that the show changes periodically, so we plan to attend it again sometime in the future, hopefully taking our children and grandchildren to see it.
Saturday night was our last evening to go out on the town in Puerto Vallarta. We decided to ride the bus to the Romantic Zone and then walk to the beach. Our goal was to find a restaurant that wasn’t too fancy (no white tablecloths for us), but still had tables set on the sand and a menu of good food and wine at a reasonable price. We were hoping to get to view one of Puerto Vallarta’s famous sunsets that night, and we weren’t disappointed.

Langostinos Restaurant & Bar, on the beach near the Muelle de Playa Los Muertos, was a wonderful choice for the food, service, people watching, and amazing sunset. While seafood was our original thought, we ended up ordering the Chateaubriand steak, a tender, juicy, flavorful tenderloin prepared perfectly. It was large enough for us to share and take how a portion for lunch the next day. As we sipped our wine and relaxed, the brilliant fire-orange and blue sunset was the perfect conclusion to our memorable 25th Anniversary weekend. 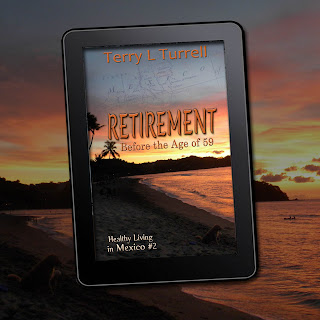 Terry and Jon found a way to escape the rat race, retire early, and to make their money go further. This story will inspire others to quit their jobs, retire earlier rather than later, and begin living a healthier life, while having more fun and doing what they enjoy. Why wait?
Making the decision to retire early was the easy part. Deciding where to retire took more travel in their motorhome and lots of thought. The process of selling and giving away their excess possessions so they could begin living a simplified, healthier life was a journey in itself.Terry and Jon’s adventures while traveling in their motorhome are enough to entice one to go... Read More at Retirement Before the Age of 59: Healthy Living in Mexico Book #2.
Follow me on Facebook at Healthy Living and Traveling in Mexico.
View my website at http://www.healthylivingandtravelinginmexico.com/.
Posted by Healthy Living and Traveling in Mexico at 3:37 PM