EDITED JANUARY 23, 2017:
It has been over two years now since we sold everything in the U.S. and moved to the casita we purchased in México. We are convinced that we made the right decision by moving south of the border. Our new lifestyle and the change of climate has greatly improved our mental health, as well as our physical health. The most significant change is that this is the first winter that Jon has not experienced depression, an annual nearly debilitating illness he suffers from. It is late enough in January that I am confident his improved mental outlook will continue through the winter. November is the month that he would typically start to become melancholy, then slowly become entangled with negative feelings of hopelessness, lethargy, and be stuck on the couch unable to summon the energy to accomplish anything but escape into western novels.
Living in México has been a positive change for us in so many ways. This has been the first winter in almost twenty years that my husband has remained his “normal” self, not sinking into depression. He is interested in building things, like recycle bins for our barrio’s new recycle program. Without me prodding him, he is able to repair leaky faucets, install mosquito screens, hang the Christmas lights, prune old, brown fronds from our palm trees, rake the leaves in the yard, repair our golf cart, and work on other projects that he has an interest in. That’s a significant change in his life, which means we are both happier.


Leaving behind the dreary winter weather and the stressful life in the United States has been a major reason for this improved mental outlook. We know we made the right decision by moving to México.
Over two years ago, I wrote about “WINTER BLUES”, SAD, CLINICAL DEPRESSION, BI-POLAR, and our early thoughts of moving to somewhere south of the border. Below is the original article. As you will see, we’ve come a long way from those sad winters. I believe others with mental health issues can benefit by moving out of the hectic rat race and to a warmer, sunnier climate.

“Winter Blues”, also known as Seasonal Affective Disorder, or SAD, is “a mood disorder subset in which people who have normal mental health throughout most of the year experience depressive symptoms at the same time each year, most commonly in winter”, according to Wikipedia. SAD is an accepted medical diagnosis, with symptoms of depression and anxiety that recur annually, usually during the short, dark winter months. The prevalence increases in more northerly areas with Florida having an incidence of about 2% and Alaska having an incidence of about 10%. A major contributing factor is low sunlight exposure due to dark winter skies, shortened daylight hours, and too much time spent indoors. My conclusion is that living south of Florida may likely decrease the incidence of SAD to near zero.


When the gray skies and cold, rainy weather in Oregon start in October each year, I feel the stirrings of dread. As the dark days continue day after day into November, I begin feeling down. The number of hours of daylight decreases bit by bit each day, until the Winter Solstice in December marks the shortest day of the year, with only nine hours of daylight in Oregon, which contributes to my mental doldrums. I crave sunshine, warmth, and more daylight hours. I have found, as have others, that spending time in sunny, warm climates with longer daylight hours helps battle the lethargy and mild depression that can occur during the winter.
The December days are significantly longer south of the border than in the United States, with over 11 hours from sunrise to sunset in much of México. In contrast, Oregon has about 9 hours of daylight from sunrise to sunset in December. Farther north than Oregon, the winter days get even shorter. In Calgary, Alberta there are 8 hours of daylight in December. In Fairbanks, Alaska, there are only 4 hours of daylight in December, with the sun setting before 3:00 in the afternoon! No wonder people get the winter blues! The longer hours of daylight and the blue skies in México lift our spirits. We long to escape the dreary gray skies of Oregon and the short winter days with fewer hours of daylight!
Jon also experiences depression during the winter months, a more severe form that sometimes begins in early November and lasts into May. For six months of every year, beginning in the year 1999, he has battled the depression curse. By utilizing all of the medical recommendations, including sufficient Vitamin D levels from sunshine providing ultraviolet light through the skin and by taking Vitamin D supplements, increased fish in the diet and higher doses of fish oil supplements (9600 mg per day of fish oil), and increased physical activity, he is usually able to decrease the length and severity of his recurring depression. Increased full-spectrum light exposure has been shown to improve the symptoms of depression for many people. Jon used a special full-spectrum lightbox at this office desk for years as part of his treatment plan. But, we began to think, why not go where the sun shines most of the year, spend more time outdoors, and get the sunlight naturally? Retiring in México began to sound better all the time.
This was one of the main reasons that Jon and I first began traveling in our motorhome to México each winter. We started with a three-week trip to San Felipe in Baja, California just to get a feel for crossing the Mexican border. Each winter we spent a week more in México, exploring more of Baja, and then discovered we preferred mainland México. The year we spent six weeks in México, we discovered that Mazatlán was a wonderful place to be in the winter, the sunshine and warmth giving us a real mental lift. The next winter we spent three healthy months in México and began to think about how we could live there during the six winter months each year. Once we started spending six months each year in México, we didn’t want to go back to the U.S.
What started out as our treatment plan for the “Winter Blues” turned into thoughts of retiring early. My retirement before the age of 59 would allow us to move to México and become residents there. We could stay as long as we wanted, soaking up the ultraviolet rays and enjoying the longer days of sunshine year around, along with living a much less stressful life, which really helps our mental health!

I invite you to SIGN UP for my "Healthy Living and Traveling in Mexico Newsletter", published monthly with stories about our latest adventures, my recent blog articles, and news about my books.

To read more about our move to Mexico, take a look at my eBook "Retirement Before the Age of 59: Healthy Living in Mexico #2". Available on Amazon worldwide, FREE with Kindle Unlimited,

Now, all 3 books in the "Healthy Living in Mexico" series are available on Amazon.com for $11.97 or FREE with Kindle Unlimited. 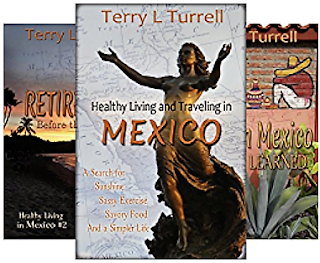 To those of you who have already read my books, I thank you and hope you have enjoyed them. If you did, please take a moment to leave a review on Amazon so others may find my books, also.

Posted by Healthy Living and Traveling in Mexico at 11:29 AM No comments: