A Visit from Mexican Federales While RVing in México

Our Experience with GrinGo! 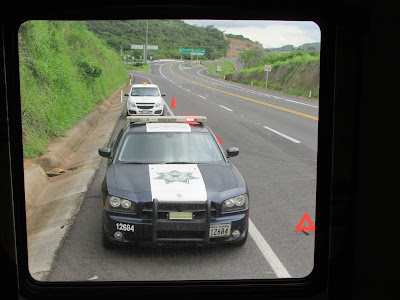 It started when our EEZ Tire alarm on the dash of our motorhome suddenly began beeping and flashing, indicating a rapid decrease in tire pressure in the front driver’s side tire—A TIRE GOING FLAT! Jon was driving and quickly pulled to the shoulder of the toll road.
Thank goodness, there was a wide, fairly safe shoulder to pull onto—this is one very good reason to drive the toll roads (called cuota roads) in México whenever possible. Those free roads are free for a reason—no shoulders. 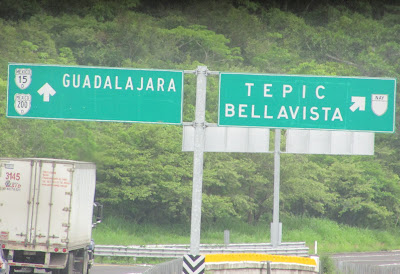 Jon’s first comment was, “That EEZ Tire alarm just paid for itself. It prevented us from driving on a flat tire and ruining it.”
His second comment was, “Oh, sh--, we don’t have a tire jack.” Our new-to-us RV included a spare tire, nicely mounted on the rear with a pretty tire cover. But no jack. And we hadn’t purchased one yet.
We looked around to orient ourselves and realized we were just past an exit to the big city of Tepic, Nayarit and a small town named Bellavista. This has to be good, we thought. A Green Angel, the free roadside assistance service in México, must be working this stretch of highway and would cruise slowly by soon, searching for stranded motorists.

Jon calmly (nothing much gets him rattled) pulled out his phone and started punching buttons. He said, “I’m sure glad I downloaded this GrinGo app on my phone. I’m calling the Green Angels.” He explained to them that we had a spare tire but needed an RV jack and an air compressor (our spare tire was about 20 pounds low and our RV air compressor had just quit working a couple of weeks previously while Jon was trying to inflate the spare to full pressure). He was told the Green Angels did not have an air compressor. Really? 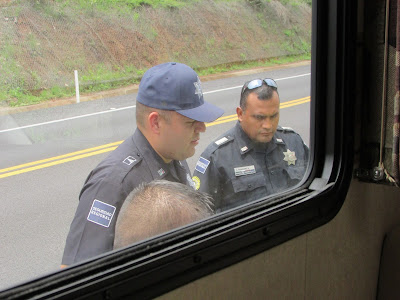 The Green Angels put Jon in contact with the Mexican Federal Police, the Federales. He explained where we were and what we needed. About 30 minutes later, the Federales’ car pulled up behind our RV and two officers approached the driver's door. Jon hopped out and had a conversation with them in Spanish, explaining again that we needed an RV jack and air compressor to change our flat tire. They didn't think the tire looked that flat since the rim wasn't sitting on the pavement.
Jon showed them the EEZ Tire monitor and told them the air pressure was dropping fast, already down by over 20 pounds of pressure—not safe to drive on. They looked a bit skeptical. Most Mexican would continue driving on a tire that was simply low on air.
The officers were surprised that we didn’t have a jack. Jon explained, laughing with embarrassment, that he hadn’t noticed the RV didn’t have one when we bought it. I wondered if the Federales were thinking, dumb gringos. 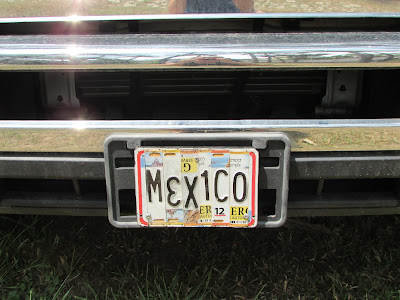 One officer was discreetly running our license plates. The Arizona plate on the back met his approval, it appeared. When he got to the front, a troubled look passed over his face. He exclaimed, “Guerrero?!” Our MEXICO trinket license plate had pieces of Guerrero stickers on it, as it was created from strips of license plates from that Mexican state. He was probably thinking, These might be dangerous folks if they are from that warring state.
Jon laughed good-naturedly, knowing the best way to put these men at ease, and explained that this was a souvenir we had purchased from a vendor in Sayulita. The officers had never seen one of these “license plates” that are commonly sold in tourist areas. It could have said “It’s Five O’clock Somewhere” and the Federales wouldn’t have given it a second glance—unless, of course, the Guerrero stickers caught their eyes. 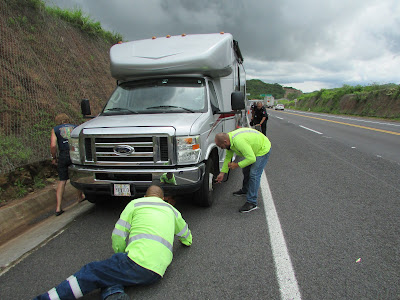 Once we passed their scrutiny, one of the officers called a roadside assistance company to come help us. Thirty minutes later, two tire repair men (llanteros) arrived in a car with a jack meant to lift a car, not an RV, but they weren’t afraid to give it a try. “Sorry”, one said, “no air compressor”.
The Federales stayed (to keep us safe while we were stranded?) the entire time the llanteros were jacking up the RV, helping Jon change the tire, and having him sign the paperwork so they could charge the government for our free service. Their bill said they would only be paid 200 pesos (about $10 US) for their service! 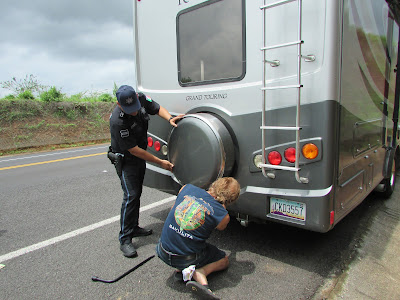 One of the officers helped Jon lift the flat tire onto the spare tire mount and refasten the cover. I realized that the Federales were there to assist and protect us. We appreciated their help so much!
I asked Jon to tip the llanteros for their work, but they said they could not accept it. I’m pretty sure they were not allowed to accept tips and knew the Federales were watching to make sure they adhered to the rules on this. After the Federales drove away, the llanteros were still standing beside their car. Waiting?
I lifted two cold Diet Cokes in their direction and they grinned. I asked Jon to take the sodas and 100 pesos each to the men. They were very appreciative.
We had left the beautiful and peaceful Delia’s Trailer Park in Etzatlán that morning thinking our drive to Mazatlán would be easy and uneventful. But we were reminded that “Life in Mexico: Never a Dull Moment”. Sometimes we have unexpected adventures during our life and travels there. Maybe I should write a sequel to this book. 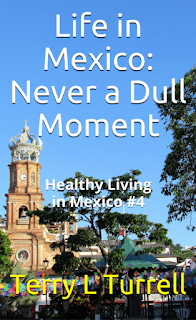 In Mazatlán, a llantero and his teenage son came to Las Jaibas RV Park where we were staying to repair our tire. They discovered a large bolt had punctured our tire and was still lodged there. They efficiently repaired the tire on the spot and swapped it with the spare for only 300 pesos ($15 US) plus a 50-peso tip which the llantero gave to his son.
We appreciate that services in México are inexpensive and that the people are so friendly and helpful. We’re so glad we retired in México four years ago. 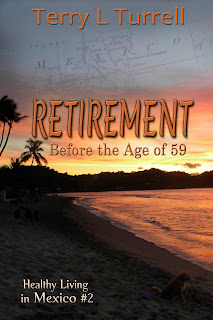 To read more about “RETIREMENT Before the Age of 59: Healthy Living in Mexico #2”, check out the book on Amazon, available worldwide.
Amazon.com
Amazon.ca
Amazon.co.uk
Amazon.com.mx

I invite you to SIGN UP for my Healthy Living and Traveling in Mexico Monthly Newsletter, published monthly with stories about our latest adventures, my recent blog articles, and news about my books.
Take a look at my Amazon Author Page to see my other books about México and health issues. Thank you for reading my blogs and books. As an independent author, any reviews you leave on Amazon will help others find my books.
Posted by Healthy Living and Traveling in Mexico at 7:03 PM 4 comments: