EASING BACK INTO RV LIFE IN THE US: Bisbee, Arizona and the Queen Mine Tour

Returning to the United States after eight months in México can bring on major culture shock so we try to ease back into the madness. We find spending our first three days in Bisbee, Arizona is a good way to transition back into American life. This historic town moves slowly and, in many ways, still appears to be stuck in the early 1900s. It’s a perfect place for our shift from laid-back Sayulita, Nayarit to RV life on our way to Oregon. 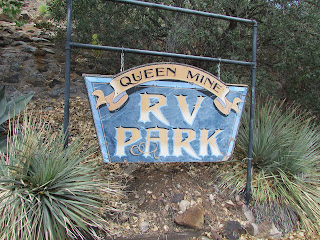 The tour into the now closed copper mine was well worth the $13.00 price of admission.  After we were each outfitted in a reflective vest, hard hat, and mine light, we climbed aboard the mine train.

Our tour guide, Pete, explained the safety rules and that once the train was inside the mine shaft, he would stop the train and make sure each of us was okay with being underground. The narrow tunnel is not a good place to be for a person who is claustrophobic.

Pete then climbed onto the orange battery-powered train engine, rang the train’s bell, and we moved forward toward the mine entrance. When the train was entirely inside the tunnel, the doors to the outside mine slammed closed and Pete stopped the train. He walked along each train-car, checking that all passengers were okay with being underground. Then he climbed back on the engine and we proceeded deeper into the earth.
Pete is a retired miner who had actually worked for years in this mine and had some wonderful stories to tell us. Not only did he explain the process of mining the copper, he had many personal stories about the fun-loving pranks the miners played on each other.

He told how in the early years, they trained mules to haul the ore out of the mine, and how hard the young guys worked to exceed their weekly quotas of ore in order to receive bonuses.

He explained that the focus was to extract the high percentage of copper, with silver and gold as byproducts.
Back in the Queen Mine’s museum area, we saw samples of the many ores, not just copper, that were extracted from this mine, including the stunning Azurite, one of the two copper carbonate minerals found in nature. There were also old mining tools and the mine’s Safety Scoreboard, emphasizing the importance of safety to avoid lost time accidents.

Bisbee’s Queen Mine was one of the richest copper mines in history. The mine opened in 1877 and eventually closed when Phelps Dodge discontinued mining operations in Bisbee in the mid-1970’s. The Queen Mine opened once again as a tour for visitors in 1976, nearly 100 years after the mine originally opened.

I invite you to SIGN UP for my Healthy Living and Traveling in Mexico Newsletter, published monthly with stories about our latest adventures, my recent blog articles, and news about my books.


My Amazon Author Links *
Posted by Healthy Living and Traveling in Mexico at 7:52 PM